Today is the 11th Anniversary of the launching of Lil Suzy's Paradise! We, the webmasters, would like to thank all of Lil Suzy's fans who have been loyal followers of the site over the years. Thanks for the support!  We'd also like to thank Suzanne for supporting the site from the beginning and for being such a wonderful artist and friend.

Lil Suzy would also like to thank all of her fans who have shown her much love and support over the years by visiting her website. She loves you guys and gals very much!

As always, Thanks for visiting Lil Suzy's Paradise!

A screenshot of LSP from March 4, 2001.  The site title at the top was originally in a calligraphy styled font and the top left background had purple swirls. The archive we got this shot from didn't generate that font or the background.  This is the earliest screenshot of the website we found. 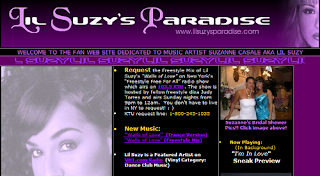 A screenshot of LSP from Oct. 18th, 2005. This contained a couple of animated gif's of various flickering Lil Suzy photos and an animated "Lil Suzy" name scroll.

We finally found a couple of early posts about LSP. Here are a few snippets...

(From the Original Lil Suzy's Paradise - 2001) I've been a fan of Lil Suzy's since 1992 when she released "Take me in your arms" and I admire her for continuing to do and sing what she loves best... Freestyle. Even when everyone says that freestyle is dead, Lil Suzy proved that it wasn't to her and her fans. She continued to make the music that got her career started while other freestyle artists changed the type of music they made to keep up with the mainstream. But Lil Suzy proved the people, who said freestyle was gone, wrong, by selling singles, getting her music on the radio and continually releasing music. Just for the record... I have still not seen Lil Suzy perform in person.

(Taken from an archive of Oct 2001 ) The reason I decided to create a Lil Suzy fan web site was because I thought it wasn't fair that the internet is filled with hundreds of fan web sites on singers whose music style is well known, yet artists who perform freestyle still aren't getting the recognition they deserve. Freestyle music and their artists have never been given the promotion they truly deserve and they are never given the chance to bring their music style to the mainstream. There are still no "major music awards" that honor freestyle music. It is still sort of hidden and "underground" the way Rap used to be. But Rap music now gets recognized and honored. Why doesn't Freestyle?

So I decided it was only fair to create a fan web site that tributes someone who deserves the same kind of tribute, promotion, and recognition that artists who perform other types of music receive. That's why I decided to tribute Lil Suzy as an artist. Perhaps we can play a role in getting her and freestyle music more into the eyes and ears of the mainstream. Because she and the music surely deserve it. - Freddy (webmaster) 2001


(Taken from an archive of Feb 2004) My co-webmaster John was also a fan of Suzy's "Take Me In Your Arms" and remembers how big an impact that song made in the Bronx back in 1992. Together, we will always remember 1998 when Lil Suzy's music was there for us both at a time when we needed to escape. We will always have fond "Memories" of those times when her music made us forget the trials and tribulations of the everyday.

Congratulations to Lil Suzy and the awesome web masters F & J! Wow 11yrs with LSP site. I still remember the first time I visited the website. It keeps getting better and better. Great job guys!

Thank you so much Veronica! Thank you for being such a great supporter over the years... You're awesome!
- F & J